Well, last week everything was hitting the fan, but this week was wonderful. 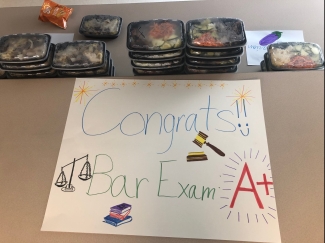 Residents at Nationwide Children’s Hospital made sent me a picture of meals I made with an adorable poster they made me!! 😭😭

First off, a lot of you have probably already heard but I found out yesterday that I passed the Ohio bar exam! So pretty soon I will be a licensed attorney.

This does not affect Jane’s Kitchen operations. I plan to keep cooking for a few more weeks.

Things seem to be looking up here in Ohio, and we are slowly moving toward reopening. For that reason I am suspending donations, though this is subject to change. Right now I have about $370 leftover, enough to cover costs of meals for 2-3 weeks. This should be enough time to see how quickly/successfully our communities can return to normalcy and decide what the next steps are for Jane’s Kitchen.

In the meantime, I’ll be looking for lawyering jobs between cooking; wish me luck!

Total of 60 meals donated this week! Nationwide Children’s Hospital, Worthington Police, LifeLine of Ohio, and a janitor’s support group I found online that requested a few meals. Keeping things small for the next few weeks so I probably won’t be reaching out to new groups.

Learned a new recipe last week, got obsessed, and made it for everyone this week! Chicken marsala, which is so delish! I think for next week I will pick another recipe and make it for everyone. Much easier as far as shopping/supplies/planning goes.

I have used up all of the original box of 150 meal containers I bought when starting this whole project (including the 14 boxes from the first batch of meals that were returned to me before I realized that collecting, cleaning, and sanitizing boxes was way too much work for everyone involved). What a strange feeling! Will have to get new boxes for next week.

Now that all those boxes have been used, I’m able to provide an average cost/meal for those 164 meals–my spreadsheet says each meal cost $3.18. I think I had originally estimated that every $10 donated would cover the costs of 3-4 meals, so that’s right in the zone!

That’s it for this week! Thanks everyone for supporting, encouraging, and helping me on this!